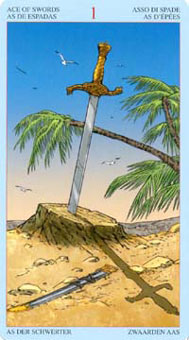 1. Where did the Tarot come from?

No one is really sure where the Tarot originated. See A Brief History of the Tarot for more.

2. How many Tarot decks are there?

There are probably about 100 decks or so on the market today. To see representations of some of the more available decks, check out Decks of the Tarot.

The main difference between Tarot decks is the artists' interpretations of the cards. There may be only subtle differences between many of the cards, while some cards may be vastly different between decks.

A good example is the Cat People Tarot deck. In the Rider-Waite and most other decks, there is a card called "Judgement" which depicts the souls of the Dead rising from their graves and ascending to Heaven. This card has been replaced in the Cat People tarot by the card "Rejuvenation", which depicts a happy woman and cat joyously celebrating.

4. What is the difference between Tarot and other forms of divination?

There are many forms of divination, some of the more popular being runes, I-Ching, and "scrying". The runes come from the Norse tradition, and the I-Ching is an ancient Chinese system of divination. The Tarot seems to have roots in almost every culture.

5. How do you know the meanings of all the cards?

Almost every deck comes with a small booklet that gives the generally accepted meanings of each card. These are good guides for the beginner, but eventually the Tarot reader will want to keep track of their own interpretations of each card as they gain experience reading. Each card also has slightly different meanings as they appear in various positions of a spread, and Tarot readers soon develop a "gut feeling" about the meaning of each card. For further information about the meanings of the Tarot cards, see The Major Arcana and The Minor Arcana.

6. Do you have to have a "gift" for reading the Tarot?

In my opinion, if a person is open to the Tarot and trusts their feelings and intuition, they can read the Tarot. Some do seem to have more of an affinity for it than others.

7. Is the Tarot dangerous?

I have been asked this question a few times, and the answer is always the same: No. The Tarot has been designated a tool of the devil by some religious groups, and that is a shame. Nothing bad or strange can happen to you by using the Tarot, unless you believe something bad can happen to you. They are only cards, so they can not be inherently evil or malicious.

You have to pick the deck that "feels" right for you. See Choosing Your Own Deck.

9. What is the difference between all the spreads?

There are many different spreads used in reading Tarot cards. Many people prefer one spread, others tailor the spread they will use to the particular question they are reading about. Each spread is geared for a different kind of question or situation. For instance, if you wanted to know the outcome of a particular situation, you might choose either the Celtic Cross or Crowley's Two-Futures spread. The Two-Futures spread will you give you two different possible outcomes, and the other cards will guide you as to what you should do to acheive the more favorable one. The Celtic Cross will you give you an outcome as well, but it is a less specific that the Two-Futures Spread.

When a card appears "reversed", that means that it appears in the spread upside-down. This results from the way the querent can shuffle the cards, which is any way they want. When a card is reversed, the meaning is usually the opposite or close to the opposite of what the card would mean right side up. For example, the Devil usually signifies being tied to material possessions, or being a slave to something material. If it appeared in a spread reversed, that would probably mean that the querent has freed themselves from material wants or greed.