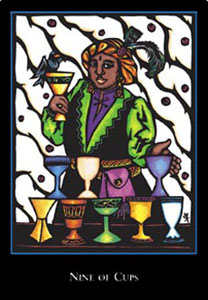 Meanings of the Cards

There are general guidelines about the meanings of the cards (see The Major Arcana and the Minor Arcana, coming soon), but remember, these are not hard and fast definitions. Every reader has had cards that mean something they probably never would have thought before.

When I started reading, I had a tendency to second guess myself because I was afraid I was wrong. I would always look up the meanings in a book and go strictly by that. Gradually, I began to trust the gut feelings I'd get and the words I'd "see" in my head. Now when I read I feel like I "shift" a little; I become partly the person that I'm reading for. I would liken it to channeling without the outside influence; I tend to free associate and speak everything that comes to mind and then sort it out. If I suddenly get the feeling "mother" when I look at a certain card, I say it and usually the querent will acknowledge that that person figures significantly in their question.

I am not sure how other tarot readers handle this, but I'll explain how I do it.

I never have the querent tell me their question before I read the cards. I prefer to read the spread unbiased, because then I will not try to make the cards fit the question. I almost always know the question when I turn up the first card in the spread. Once I have read all the cards and interpreted them within the context of what I see the question was, I ask if the reading made sense to them. I only ask to make sure that if they asked for guidance on financial matters, I didn't do a reading about their love life.

I have yet to hear that any of my readings did not make sense. However, I have had one reading come out completely unrelated to the question the person asked. She had asked about some new job prospects, but the reading I did was completely about her father and their relationship. When she told me what she had asked about, I was shocked and a little embarrassed, feeling that I couldn't read the tarot anymore. However, she told me that her and her father had been fighting about a recent major decision she had made, and it bothered her immensely. The cards had apparently picked up on what was foremost in her mind.

A Note on the Death Card

Many people unfamiliar with the tarot feel that the Death card is a bad omen telling them when their time on this Earth is up. Not so. The Death card will probably never actually mean death in the literal sense. It means a transition, usually one on a large scale. It can be a good or bad one, depending on the other cards. The Death card is neutral until read in the context of its position in the spread.

You must remember to read the tarot responsibly. Whenever the Death card or any other seemingly malevolent card turns up, never tell the querent that all hope is lost and they are doomed. The tarot does not fortell events carved in stone; it tells you what may happen if you do nothing to change matters. Always gently tell the person what the cards may mean, and be sure to play up the positive cards so they know what is working for them. Remember, the cards have no feelings, but you do.

many people think that you must have a "gift" for reading the tarot. While a good knowledge of the cards and good intuition help, anyone can learn to read them if they try. It simply takes a lot of practice and time to get to know the cards yourself. While there are no fast and hard rules about the meanings of each specific card, there are a couple of general things to remember when reading them.

* If you see a lot of Major Arcana cards in a spread, it generally means   that this question is extremely important to the querent or is a   life-changing matter.

* Each of the suits can also be thought of as representing a season if   you wanted a timeline of the situation. Swords is generally thought of   as winter, cups as summer, wands as spring, and pentacles as fall.   Some interpretations on this matter may vary.

* A particular suit may turn up heavily in a spread and can tell you   what is influencing the question or querent most. For instance, if you   see a lot of pentacles, then this must be a financial matter. Cups   would indicate a matter of the heart; wands, spiritual, and swords   perhaps an argument or something similar.

Remember, the tarot can be used for many things besides telling the future. A reading will often give you as much, if not more, information on the past and present. It isn't just a parlor game; the tarot is a very powerful tool that, when used properly, can be very illuminating.